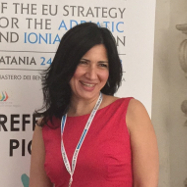 Tatiana joined the Hellenic Gas Transmission System Operator (DESFA) in 2015 and works for the business development department of the Strategy & Development Division.

She has worked as a liaison officer on issues touching upon European and international energy affairs at the Greek Ministry of Environment, Energy & Climate Change.  She also held a stagiaire position at the Directorate General for Energy & Transport of the European Commission.

She is Member of the Economic Chamber of Greece and holds an accountant & tax consulting professional license.

Check out the incredible speaker line-up to see who will be joining Tatiana.

Greece is emerging as a prominent location for LNG bunkering in the Eastern Mediterranean Given the increased interest in LNG bunkering and the country’s strategic fit as an LNG bunkering hub, DESFA , being the owner and operator of the only large scale LNG terminal in Greece, is at the final stage of maturing small scale LNG facilities on Revithoussa terminal, which is the key logistical springboard for small scale LNG distribution, such as LNG bunkering services at ports.