Digital from the Ground Up: Growth and Innovation at Rio Tinto 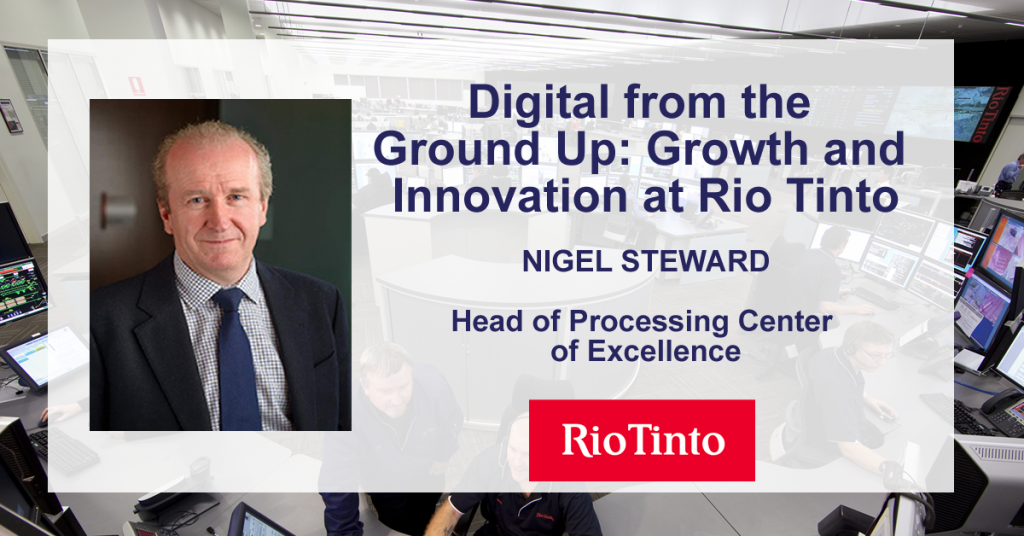 By: Nigel Steward, Head of Processing Centre of Excellence at Rio Tinto

Can you tell us a little bit about your professional background, leading up to your role at as Head of Rio Tinto’s Centre of Excellence?

I’ve worked in numerous roles in both technology and operations environment at Rio Tinto. I spent 26 years in the aluminium industry, starting in R&D and going through various operational and functional roles. Prior to my current role, I was Managing Director, Copper & Diamonds Operations, based in the USA. About five months ago the company created, and made me the head of, the Centre of Excellence for Processing in Montreal, Canada. The Centre of Excellence for Processing is focused on our assets and improving their productivity, and overall value, in a safe and reliable way.

What does Operational Excellence mean to Rio Tinto?

At Rio Tinto, Operational Excellence underlies safe, predictable, and reliable production, and drives asset performance improvements. It is a journey that is all about continuous improvement, year after year.

What is one thing that companies can do to gain real business value from operational excellence initiatives?

At Rio Tinto, we have seen so much business value come from innovation. In order to make that happen, you have to engage employees, at all levels, in the innovation process. We’ve had several innovations over the years that were sparked by our employees. We encourage everyone to be actively involved in bettering our operations, and we want employees to bring new ideas to the table. For example, we saw double digit productivity improvements at our aluminium processing plants in Eastern Australia as a result of these employee innovations. These innovations really shine in our remote operating areas. Over the past 10 years we have adopted autonomous hall trucks in our operations and today we have 86 operating in Pilbara, Western Australia. We also have drills that are remote controlled from 1500km away in Perth, WA. We recently invested in autonomous trains in the region as well, so we now have robotic trains running on our very extensive rail network in Western Australia. All of these innovations have delivered tremendous value and could not have happened without our employees being actively involved in the process. [...]