Oil Refinery Avoids Shut Down Through Structured Root Cause Analysis 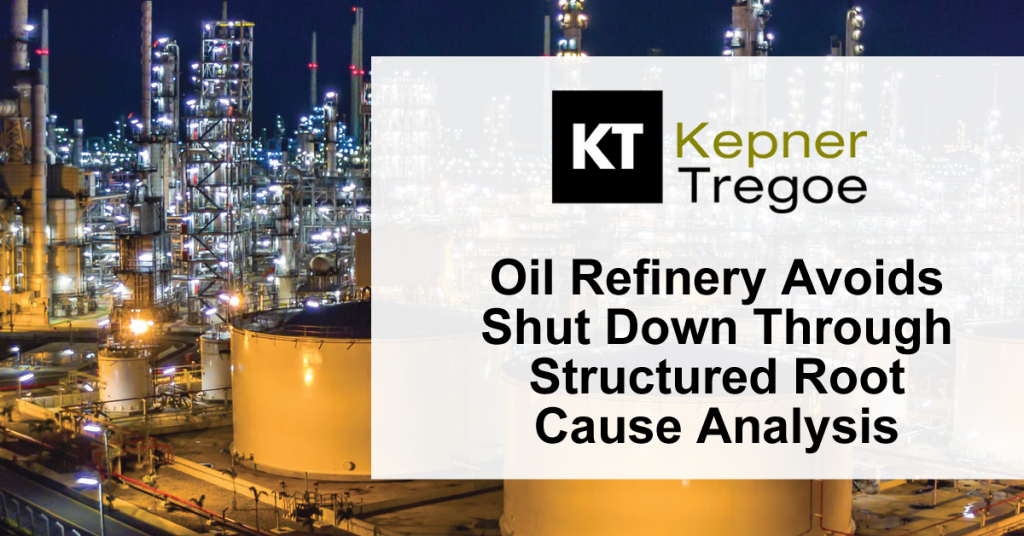 Recently I was working with a group of greenbelts who were part of their refinery’s Lean-Sigma (LS) program; I was their program advisor and mentor. On one visit, I was approached by the Refinery Manager. He advised me they were headed for an unscheduled shutdown of the cat cracker because the VGO desulfurizer was prematurely reaching end of run (EOR) catalyst conditions. It seems the feed-effluent (F/E) exchangers were fouling at an unprecedented rate and a premature and very expensive shutdown was imminent. Knowing I was familiar with Kepner-Tregoe problem solving methods, he asked that we look at this problem and see if we could avoid the unscheduled shutdown he anticipated. I spoke to the LS Program Manager and he arranged for the appropriate group to meet the next day. They were advised to block out the entire day. The next morning, 7:30 sharp, we started. They came with charts, tables and graphs galore; the volume of data they had gathered and compiled was truly impressive. The Program Manager and I came with a problem specification template. We went through introductions, I said a quick word about the method we were going to use, and we started.

I asked the lead process engineer to give me a recap of the history so I would be somewhat up to speed with the rest of the group. He said, “For many years the fouling rate in the F/E exchangers was used as an early indicator for catalyst EOR conditions in this reactor. During most of the run, the reactor top bed pressure drop (DP) would show very little change. However, normally eight to ten months into the run, these heat exchangers would reach minimum efficiencies and we knew a shutdown was imminent. Shortly after reaching minimum efficiencies, the top bed pressure drop would increase dramatically; forcing the shutdown. Maximum top bed pressure drop was normally reaching in three to four months. When we shutdown we would skim the reactor top bed and do partial cleaning of the heat exchanger. This would extend the run to the next major shutdown. Due to a variety of issues, including safety, environmental and economic, the top bed skim option is no longer available. On the last shutdown we made several process changes including: improved water wash facilities; instrumentation and piping changes; and, because we were purchasing lower sulfur crudes, we loaded the reactor with a slightly less active and cheaper catalyst. These changes were designed to allow an 18-month uninterrupted run. However, now we are at seven months into the run and, with very low exchanger efficiencies, are facing an unscheduled shutdown within the next three to five months. We started this run in August and although we did not see it initially, due to our [...]