Floating liquefied natural gas (FLNG) is not just a term that rolls elegantly off the tongue but one also used to describe an offshore facility floating above a natural gas field. Here is everything you need to know about FLNG. 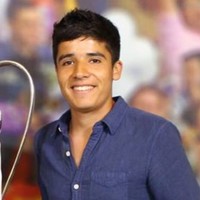 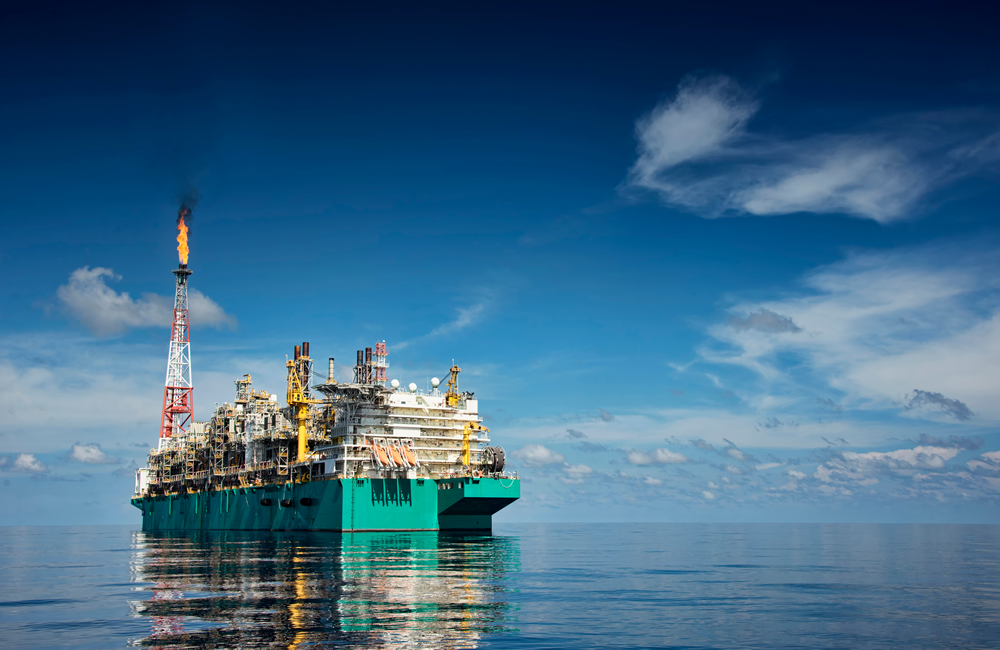 FLNG technology can unlock gas resources from underwater gas fields that may once have been economically or environmentally challenging to obtain. This can help to meet growing demand for natural gas — the cleanest-burning hydrocarbon — which is set rise by more than half by 2040, according to the International Energy Agency. Many natural gas resources are located in offshore fields, but geographic, technical and economic limitations make a number of these difficult to develop.

FLNG technology is designed to overcome these challenges. It is complementary to conventional onshore liquefied natural gas (LNG) as it helps accelerate the development of gas resources to meet growing demand.

What is liquefied natural gas?

Liquefied natural gas (LNG) is natural gas, a mixture of methane and ethane, that has been cooled down to liquid form so it can be easily transported. In its liquid state, LNG takes up around 1/600th the volume of natural gas in its gaseous state. It is odorless, colorless, non-toxic and non-corrosive. Hazards, however, include flammability after vaporization into a gaseous state, freezing and asphyxia.

The liquefaction process removes dust, acid gases, helium, water and hydrocarbons that could cause difficulty downstream. Aboard an FLNG facility, natural gas produced from underwater fields is processed and chilled to -162° Celsius (-260° Fahrenheit). This shrinks its volume by 600 times to create LNG. The advanced design of facility’s on-board LNG plant packs a typical land-based LNG plant into around one quarter of its normal size.

Natural gas is mainly converted into LNG to achieve natural gas transport over the seas where laying pipelines is possible. LNG achieves a higher reduction in volume than compressed natural gas (CNG) which makes LNG cost efficient in marine transport over long distances. LNG is principally used for transporting natural gas to markets, where it is regasified and distributed as pipeline natural gas.

How does FLNG work? 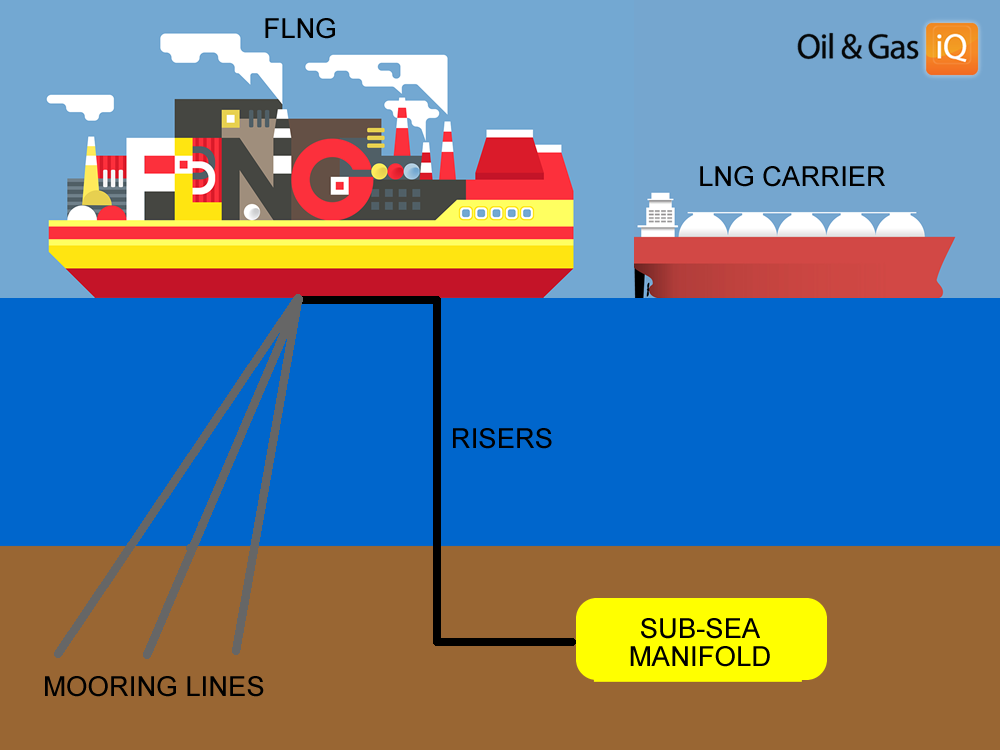 The FLNG facility is moored directly above the natural gas field. It routes gas from the field to the facility via risers. The gas is then processed and treated to remove impurities and liquefied through freezing, before being stored in the hull. Ocean-going carriers will offload the LNG, as well as the other liquid by-products, for delivery to markets worldwide. The conventional alternative to this would be to pump gas through pipelines to a shore-based facility for liquefaction, before transferring the gas for delivery.

Designers optimize safety on the facility by locating storage facilities and process equipment as far from crew accommodation as possible. The accommodation areas of visiting LNG carriers are also at maximum distance from critical safety equipment. Safety gaps have been allowed between modules of process equipment so that gas can disperse quickly in the event of a gas leak.

SEE ALSO: [EBOOK] FLNG: Towards a Natural Gas Future on The High Seas

What are the benefits of FLNG?

Natural gas is relatively clean burning compared to other fossil fuels. It is also more easily found, cheaper and actually provides a number of environmental and economic advantages.

Firstly, there is no need for pipelines, compression units, dredging, jetty construction or an onshore LNG processing plant as processing is done at the gas field. This helps maintain marine and coastal environments. The facility is also able to be decommissioned and re-deployed elsewhere relatively easily.

FLNG is more economically viable than pumping gas to the shore, opening new business opportunities for both developing countries and regions where disputes would make pipelines impractical. As well as this, the role of LNG as direct use fuel without regasification is growing slowly but surely.

What are the drawbacks of FLNG?

When it comes to the design and construction of the FLNG facility, every element of a conventional LNG facility needs to fit into a space around one quarter the size, whilst maintaining safety and flexibility of production. Containment systems and product transfers also need to withstand the effects of the wind and waves.

SEE ALSO: Why small to midscale FLNG is the future and your 3 point checklist to getting it right

What is the history of FLNG?

Experimental development of offshore LNG production began in the mid-1990s. Mobil developed a FLNG production concept based on a square structure with a moon pool in the center, known as ’The Doughnut‘, in 1997. Following that, major projects conducted by the EU and major oil and gas companies made great progress in steel concrete hull design, topside development and LNG transfer systems. The first completed FLNG production facility was the PFLNG Satu, off the shore of Sarawak in Malaysia.

Since the mid-1990s, Shell has been working on its own FLNG technology. This includes engineering and the optimization of project developments in Namibia, Timor Leste/Australia, and Nigeria. In July 2009, Royal Dutch Shell signed an agreement with Technip and Samsung allowing for the design, construction and installation of multiple Shell FLNG facilities.

Shell’s Prelude facility is set to be the biggest one ever.

SEE ALSO: [THE BOARDROOM] Get Involved In FLNG now, The Future Is Sooner Than You Think

Prelude: What is the future of FLNG?

Launched in 2013, Prelude is Shell’s first FLNG facility. She recently reached a significant milestone when gas was introduced onboard for the first time. The Gallina, an LNG Carrier from Singapore, shipped the gas to the facility and utilities can now switch to run on gas rather than diesel.

Prelude is now on location, 475km (295 miles) north-north east of Broome, Western Australia, in around 250 metres of water. Once operating, Prelude FLNG will produce and liquefy natural gas from the Browse Basin. Once fully operational, the project will deliver LNG to Shell’s customers around the world while creating significant economic and social benefits for Australia. They include hundreds of jobs, tax revenues, businesses opportunities for local companies, and community programmes.

Prelude’s hull is 488 metres long (1,600 feet). Despite its large proportions, the FLNG facility will take up just a quarter of the footprint of an equivalent land-based LNG plant. She is designed to remain at sea for around 25 years in severe weather conditions and even withstand a category five cyclone. FLNG facilities can then be re-deployed to develop new gas fields.

FLNG technology offers countries a more environmentally-sensitive way to develop natural gas resources. Prelude will have a much smaller environmental footprint than land-based LNG plants, which require major infrastructure works. It also eliminates the need to build long pipelines to the mainland.

Over the lifespan of Prelude, the project is expected to add billions of revenue to Australia’s economy, create hundreds of direct and indirect jobs, spend billions on Australian goods and services and improve the country’s balance of trade through export of LNG, LPG and condensate.