The run-down of the world's essential projects and milestones

Top 10 FLNG projects of all time

Since the 1970s, oil and gas companies have been interested in the concept of FLNG projects – with research conducted by firms such as Kvaerner and Moss Maritime resulting in the drawing up concept designs for state-of-the-art floating LNG plants.

Running in tandem with the development of FPSOs, FLNG projects  have only recently begun to reach maturity – and with an increasing desire to developed gas fields in the Asia-Pacific region, future FLNG projects could become the industry solution.

As we prepare to enter a time when FLNG projects may begin to rival oil FPSOs, Oil & Gas IQ run down the Top 10 FLNG projects that you need to know about.

The first major research project to come out of the 1990s focus on FLNG, the Doughnut was an FLNG production concept developed by Mobil. The design was a for a floating plant that could produce, store, and offload over six million tonnes of LNG per annum. It would weigh over 100,000 tonnes, and would have contained enough storage tanks for 250,000 cubic metres of LNG.

The Doughnut is also remarkable for its proposed square doughnut hull shape, which would have resulted in an extremely stable platform with a moonpool in the centre, able to take advantage of excellent motion characteristics. The size of the pool was designed to dampen the movement of the vessel, and the entire hull was to be built in four sections – allowing standard-sized docks to build such an enormous vessel.

The Doughnut concept was soon followed by the EU-led research project Azure. This was the first design to show that a full floating LNG chain was possible – and could be built by 2004.

This would include FPSOs, a floating regasification unit, and shuttles that would move the FLNG between vessels. The Azure study revealed the need for financially-viable mooring solutions, as well as improved hydrate management systems.

Since agreeing to work alongside Technip Samsung in 2009, Shell has recently launched the world’s first FLNG development – the  A$12 billion Prelude FLNG. 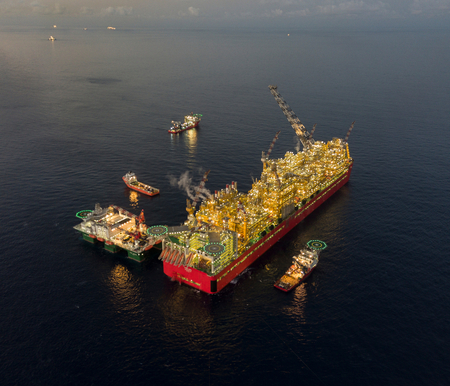 The Prelude is half a kilometre in length and constructed of a quarter of a million tonnes of steel. It displaces as much water as six aircraft carriers and over 600 engineers contributed to its design.

Petronas’ 2011 Front-End Engineering Design (FEED) contract with Technip and Daewoo resulted in the world’s second FLNG project, the PFLNG1 or PFLNG SATU. The PFLNG1 is 365 metres in length, and weighs over 100,000 tonnes when fully laden.

It became the first FLNG to begin LNG production when it produced and delivered LNG from the Kanowit field in Malaysian waters in April 2017.

Built by Keppel in Singapore, the Hilli Episeyo is the world’s first converted FLNG vessel. Launched in July 2017, the Hilli Episeyo was converted from an LNG carrier built in the mid-1970s, and moved from Singapore to Cameroon in October 2017. It is 300 metres in length, and has a gross tonnage of 120,000.

In March 2018, it became the second FLNG vessel to begin production.

Petronas’ PFLNG2, located in the South China Sea, began production when Petronas awarded its second FLNG FEED contract in 2011 – to Samsung and the JGC Corporation. With final investments made in 2014, the facility is expected to produce its first LNG from the deep water Rotan gas field in 2020.

The PFLNG2 is designed to produce 1.5 million tonnes of LNG per year, and will be moored using an external turret. It will be non-propelled and is intended to manage 20 years of production without dry docking.

Having received over seven billion dollars in investments, the Delfin LNG group is now working on the United States’ first FLNG project. Approved by the Department of Energy in June 2017, the US will be able to export LNG to nations without FTAs. It will be commissioned in 2021-2022, and will have the potential to later expand its capacity from 13 million tonnes, to 21.

There is an existing LNG system off the coast of Louisiana – and plans to move fuel from the platform there to four FLNGVs moored in the Gulf of Mexico. Delfin acquired the current pipeline system from  Enbridge, and are planning to modify and restore the pipeline following its abandonment in 2011.

Ophir Energy is attempting to find final investment for its FLNG project with Golar LNG. Due to slow progress and difficulties securing finances, the FID has been delayed since Q4 2016. If funding can be assured, the project will come in at a total cost of $2.1 billion, with first production likely in 2022. Ophir is also on the hunt for a new CEO, further muddying these turbulent waters.

Aided by Eni, the Mozambican government is developing a $10 billion FLNG facility in the Coral Field, discovered in 2012. This will be the first FLNG project in Africa, and is expected to become fully operational in 2022. The reserves in the Rovuma Basin, in which the Coral Field is located, could supply both Tanzania and Mozambique with enough fuel to meet their domestic demands for the next 5,000 years. The development of FLNG projects has the potential to significantly alter the economise of some of the poorest nations in Africa.

Republic of the Congo

London-based and Africa-focussed New Age are now looking to develop FLNG projects in Cameroon and the Republic of the Congo. These projects will allow development of new fields, and a chance to bring two new FLNG projects onstream by 2022.

However, recent developments – including the sacking of many senior staff members, may have jeopardised or delayed these ventures.

If you enjoyed this article, make sure to check out our guide to FLNG.