A total of 1.41 million b/d of crude distillation capacity will come onstream during 2010, falling well short of the International Energy Agency's (IEA’s) expected increase in total world demand of 1.9 million b/d this year, according to a new analysis by Evaluate Energy. What’s more, the new capacity is not always coming onstream where it is most needed, with Chinese capacity increases in particular lagging behind the pace of oil demand growth.

Worldwide, refinery utilisation has been creeping up quarter by quarter in 2010, with current capacity utilisation running at about 84 percent, according to Evaluate Energy estimates based on world refining capacity of 89.2 million b/d and the IEA’s latest estimate of refinery runs of 74.7 million b/d.

Chinaand India dominate in terms of refinery expansion plans, accounting for over half of the capacity additions this year. But China will add just 484,000 b/d this year including the start-up of two new 200,000 b/d refineries, falling short of an expected increase in demand of some 766,000 b/d according to the IEA. Meanwhile India will add 268,000 b/d of crude distillation capacity in 2010, outpacing its IEA-estimated demand increase of 100,000 b/d this year.

Including longer terms projects, China has a total of 3.3 million b/d of projects either in the planning or construction stage, and with Chinese oil demand set to rise by a further 423,000 b/d in 2011, according to the IEA, these new projects will need to come onstream just to keep pace. Although the majority of the capacity is to be added by PetroChina and Sinopec, China has also welcomed foreign partners to collaborate in the construction of new refineries, including PDVSA, Kuwait Petroleum, Qatar Petroleum and Rosneft. These joint ventures have more to do with securing strong crude supplies for China than the need for financing. The joint venture partners will benefit from the arrangement with a long-term customer for their crude and refineries that are already geared for the countries specific crude blends.

India’s planned expansion in refinery capacity of 268,000 b/d for 2010 follows a large increase during 2009 from the completion of Reliance Industries’ Jamnagar refinery construction. This 580,000 b/d refinery is adjacent to Reliance’s existing 660,000 b/d refinery with the combined capacity making the world’s largest refining complex. Including longer-term plans, India has 1.3 million b/d of capacity expansions in the pipeline.

At the other end of the scale the United States have no major expansion due for 2010, with the sole project if completed adding 25,000 b/d of capacity in 2010. The US has suffered a drop in demand following the recession and now finds itself with a large amount of over capacity. In the medium term, US refinery projects are still planned with a focus on equipping refineries with the capability to handle increased bitumen supplies from ramped-up Canadian oil sands production. 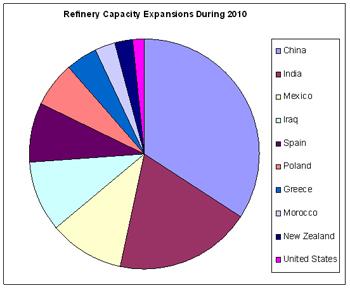