As the Russia-gate saga continues to unfold on Capitol Hill, US president, Donald Trump, touched down in Riyadh on the initial leg of his first foreign trip.

The 45th president leaves behind him a growing domestic backlash over the dismissal of FBI director, James Comey, and the appointment of a former FBI chief as special counsel to investigate what has become known as “The Flynn Affair”.

Trump’s whirlwind tour will take him from the Saudi capital to the 43rd G7 summit in Sicily via the Holy Land, Rome and Brussels in a week.  The timing of this first leg of the whistle-stop is calculated, opportune and telling. 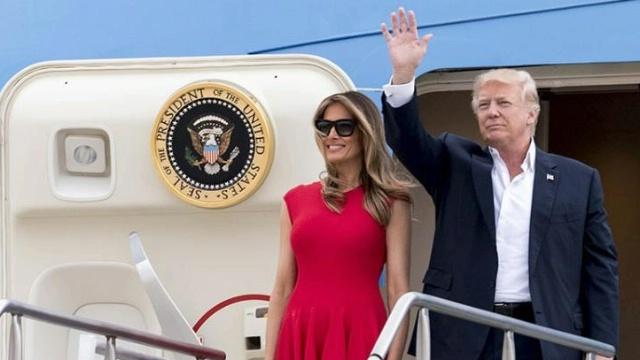 Big business loves a state visit and Trump’s Saudi sojourn has prompted a flurry of economic activity between the two nations.

On Saturday, before addressing a quorum of 50 leaders from Muslim-majority states, the US and Saudi Arabia put pen to paper on a weapons deal worth $350bn over the next decade.

The historic arms accord took place against the backdrop of Saudi-led intervention into the Yemeni civil war passing the two year mark.

Trump’s arrival also coincides with Opec’s  scheduled meeting  in which members are likely to commit to a prolongation of production cuts into 2018.

The Gulf kingdom and Opec kingpin is the world’s single largest oil exporter and has been hard-hit by low prices since 2014.

Opec’s commitment to production cuts has been an attempt to re-float a tanking per-barrel value. However, the ramping up of US shale production under Trump’s America First Energy Plan has negated their efforts.

Saturday’s signing of billions of dollars of oil contracts with the likes of US service providers, GE and Halliburton, represents a further measure of good faith in a relationship dented by international  commodity wrangling.

While arms and energy were clear imperatives for US-Saudi dialogue, Trump’s address to 55 convoked Middle Eastern nations was ostensibly about stunning Islamic terrorism at the root.

Scheduling and rhetoric suggest another motive: the speech took place the day after Hassan Rouhani won a crushing landslide victory in the Iranian general election.

Trump used the opportunity in front of Sunni states to single out the Shia republic as providing the “safe harbour, financial backing and the social standing needed for recruitment” of terrorists.

Along with the fact that Trump has mainlined a number of notorious iranophobes into his administration, his words could be seen as direct provocation to the pariah petrostate in front of its ideological enemies.

Extrapolate that through to its ultimate conclusion, and it is also an oblique slight on Iran’s main ally, Russia.

As the good ship Trump casts off on the next part of her diplomatic cruise, she leaves a dense wake behind her.