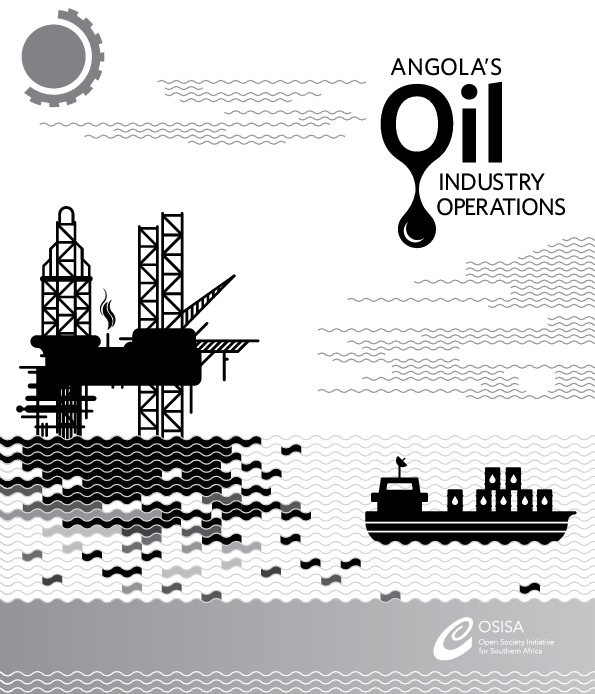 This 44 page eBook by OSISA / Maria Lya Ramos takes a detailed look at the role of oil and gas in Angola.

The research presented in this report is drawn from a three-week trip to Angola in November 2011, which included brief visits to Cabinda and Soyo and conversations with journalists, residents of Cabinda and Soyo, academics, and representatives of oil corporations operating in Angola, the United States (US) government and non-governmental organisations (NGOs). Various requests to interview Angolan government officials were declined. Following the field visit, interviews were conducted with US government officials, academics, journalists, and various NGOs based in the US and United Kingdom (UK).

Information on the oil industry tends to be concentrated within the presidency, Sonangol and key ministries – and little information is provided to the legislature in relation to contracts and other oil-related policies and practices.

Angola’s oil production drives an enclave economy that enriches wealthy political elites and leaves the masses in dire poverty. Sonangol exerts undue political and economic power, and institutions to provide checks and balances are weak. Sonangol is accountable only to the president. There is an obvious conflict of interest in that it both administers and regulates the oil sector. The company’s transactions with the national budget are porous and allow for state funds to be siphoned off. Millions of dollars are being diverted from the state treasury, either through institutionalised or straight up corruption. Angolan elites and public officials are reaping huge profits from the legal obligations of multinational companies to contract with Angolan companies. Multinational companies, for their part, turn a blind eye to corruption. Oil revenues, which should be invested in social sectors and in diversifying the economy to support the country’s long term sustainable development, are instead reinvested by Sonangol in joint ventures and subsidiary businesses, which benefit just an elite few. Environmental impacts of the industry go largely unmitigated, while communities in oil producing provinces receive no real benefits.