Five Shale Plays That Will Change The Global Energy Landscape

As the continuing echo of the shale boom resounds around the world, Oil and Gas IQ's Asdza Nadleehe looks into five shale plays across the globe that could change the energy security of the countries they are in for all time. 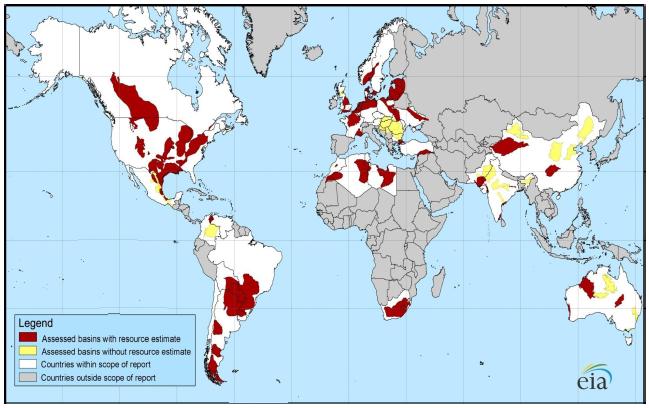 According to the US Energy Information Agency (EIA), Argentina has 774 trillion cubic feet (tcf) of technically recoverable shale gas, making it the world’s third-largest player in the shale game behind the US and China.

Located in the East of Argentina on the border with Chile, the 137,000 km² Neuquên Basin is the South American nation’s largest source of hydrocarbons, holding 35% of the country's oil reserves and 47% of its gas reserves.

Within The Basin, the Vaca Muerta shale formation may hold as much as 240 tcf of exploitable gas, and super major ExxonMobil has recently entered into an agreement with Americas Petrogas for the E&P farm-out of 163,500 gross acres of its Neuquên-based Los Toldos blocks.

Known by paleontologists as one of the world’s most fertile hunting grounds for fossil remains, The Karoo Supergroup (KSG) might also be one of the most plentiful sources of shale gas in the world.

The KSG is constituted mainly of shales and sandstones and spans out across 88,000km², underlying more than 2/3 of the entire area of South Africa and containing an estimated 485 trillion cubic feet of gas.

Like China, shale gas might be the clinching factor in freeing the country of 49 million inhabitants from its dependence on coal to fuel 85 per cent of its energy needs.

British Columbia’s Horn River Shale Formation is the largest shale gas field in Canada and part of the north-eastern Canadian deposits that amount to as much as 250 trillion cubic feet of natural gas.

Since 2008, a total of nine companies have flooded into the Horn River market, including Exxon Mobil, Apache, Devon Energy and Encana.

Whether this materialises is still to be seen, but the 38 million strong Slavic nation will have a strong claim to energy independence as its projected reserves equate to 300 years of domestic consumption..

Located in the Xinjiang Uyghur Autonomous Region in China’s north-west, the Junggar Basin covers a monstrous 189,000 km² and accounts for more than 90 per cent of the country’s shale resources.

Exploitation of this massive resource could be the move that weans the world’s most populous nation off of its addiction to coal, currently satisfies more than 70 per cent of the country’s energy needs.