What are fixed platforms?

What are fixed platforms?

Fixed platforms are shallow-water rigs that can be physically attached to the sea floor. They stand on legs of steel or concrete that are piled into the sea floor, or rely on their own weight to remain fixed in place. These platforms are stable, and resilient to wind and water movements – but are only financially viable in shallow waters, usually up to 150m in depth.

All offshore structures must function safely for at least 25 years – and fixed platforms are no exception. The fatigue loads on fixed legs is so great, that non-floating platforms can only be used in shallow, coastal waters.

Conventional fixed platforms, or FPs, can be constructed of steel jacket or concrete caisson. The former are rigs primarily made using tubular steel piled into the sea floor, whilst caisson rigs feature submersed oil storage tanks that allow them to be constructed in very shallow water, and then floated to their final position. 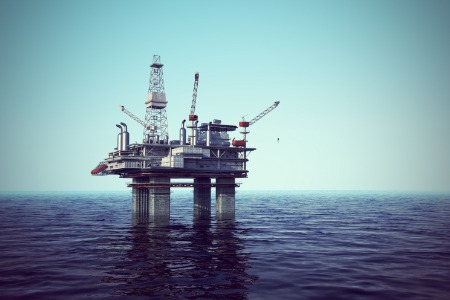 Both types of FP have very long life cycles, and feature a large deck with space for crew facilities, production operations, and drilling rigs.

Tower platforms are narrow rigs with a flexible tower below the deck, extending all the way down to the sea floor. They are similar to FPs, but have a much smaller footprint, and the flexibility of their tower means they can move with the pressures exerted by deeper and rougher waters. CTs are also far more robust than floating rigs, so can withstand major weather events in depths of up to 1000m. 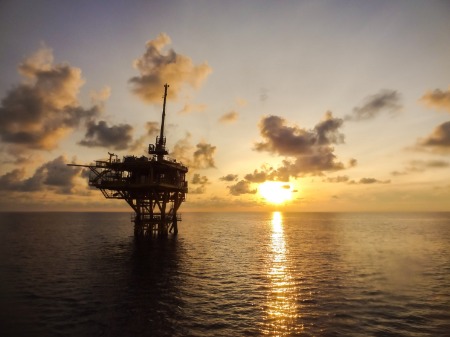 There are two types of tower platforms – the freestanding tower, which features no additional mooring beyond its slightly wider base, and the guyed tower, requiring lengthy guy lines to keep the structure level. Both types keep their piling in the centre of the rig to reduce stress further.

Sometimes included in the floating platform group, tension leg platforms, or TLPs, are buoyant platforms kept stable by high-tension moorings, or tendons. These moorings link the hull to a template affixed to the sea bed. Most TLPs feature a hull kept buoyant by four air-filled columns, much like a semi-submersible. The tethers in a TLP are incredibly stiff, eliminating nearly all vertical movement, and allowing the wellheads for production to be located on deck – giving much more control over the production from the reservoir. 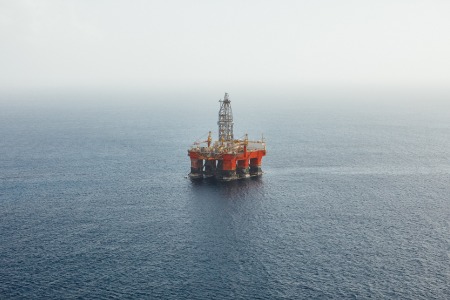 Larger TLPs will usually have a full drilling rig on the deck, whilst smaller platforms – sometimes referred to as Mini-TLPs – may have no production facilities on the platform at all. TLPs have been in use since the mid-1980s and can be moored at depths of up to 1500m.

Seastar platforms are similar to TLPs, but are semi-submersible rigs with a subsurface star-shaped lower hull that is filled with water when drilling. This lower hull is star-shaped, and is the point from which the tendons extend. As a combination of both semi-submersible technology and tension-leg design, these platforms are kept under constant tension. The platform can move laterally, but not vertically, due to the opposing forces of buoyancy and tension. They are typically used for smaller reservoirs of depth up to 1000m, where full-scale TLPs are not financially viable. 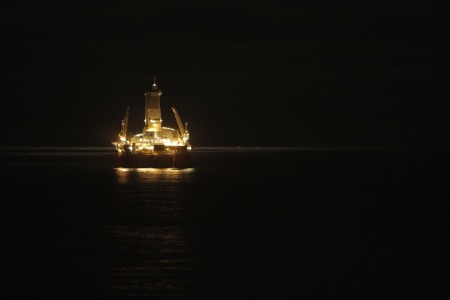 In addition to their role as rigs at smaller-yield sites, seastars are also used as utility, satellite, or early production platforms in complex or large discoveries. With a cost curve that can be beneficial with few proven resources, many seastar rigs have been built using existing infrastructure at even lower prices. They can also be situated in close proximity to other seastars or rigs due to their small sea floor footprint.

Gravity-based structures are steel reinforced concrete platforms containing cells that can be used to control buoyancy when sinking the rig in place. 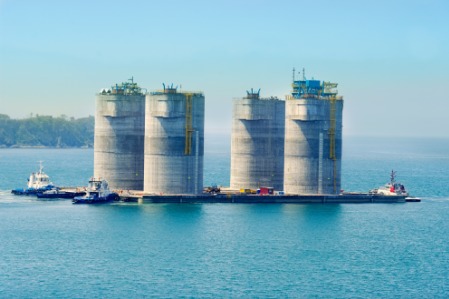 Gravity-based structures are used for depths of between 20m and 300m, and require a preliminary survey of the sea floor before being sunk due to the extreme pressure exerted on the bed. No other tethers, tendons, or guys are used to keep the structure in place – and they have comparatively large footprint.

The main drawback with fixed platforms is that they can only be deployed up to a maximum depth of around 1500m, and cannot be moved once installed. With the exception of the seastar, this means that the success of a fixed platform operation depends on the continuing productivity of the field in which they are located.

Structurally, the pressure on joints involving ordinary steel can be immense – due mainly to the variations in loading conditions that occur in rigid structures in mid to deep water. Large lateral loads exerted by storm conditions are uncommon – less than a one-in-20 chance globally during a 25-year life-cycle – but can be catastrophic. With no mobility and expensive start-up costs, fixed platforms usually require a significant risk, or a large oil discovery to justify their construction.

The Rankin A platform is one of the largest gas producing platforms in the world, and was the first platform to be situated in the North West Shelf field – about 135km north-west of Karratha. It is a traditional jacket design, standing a little over 200m tall, at a sea depth of 125m. The platform is capable of producing 34.0 x 106m3/d (1200 MMSCFD). Following an eighteen-month hook-up and spudding operation, the Rankin A platform became operational in May 1984.

Standing 120 miles off the coast of Louisiana, the Baldpate is the world’s first free-standing compliant tower, reaching 600m above the sea floor at its highest point. Following the spudding of the discovery well in 1991, a further six wells were sunk – with production exceeding 50,000 barrels per day, and 150,000 million standard cubic feet per day (MMSCFD).

If you enjoyed this guide, why not have a look at our guide to FPSOs?

Baldpate stands on four legs, with two articulated axial tubes on each leg – ensuring dynamic movement and a sway-response cycle of approximately 30 seconds. The 100m tower can move up to 3m during adverse weather conditions. The walls of the legs are eight inches thick at most, and 3.5 inches at their narrowest.

The first TLP to be constructed was ConocoPhillips’ Hutton, installed in the North Sea in 1984, and operated for 30 years, enduring waves of up to 25m and wind speeds exceeding 100mph for decades – despite only being designed for a 25-year service life. The Hutton had 16 tension legs and weighed approximately 50,000 tonnes. It stood at a depth of 143m, 130km off the coast of the Shetlands. The production maximum was around 150,000 BPD oil, and 400 MMscfd gas.

Located off the coast of Louisiana in the US, the Morpeth TLP stands in just over 500m of water and is consists of a single central column with three radial pontoons. The column supports a 34m² deck, split over two levels. The Morpeth is capable of producing 38,500 barrels per day, and 42 MMscfd of gas.

The Troll A gas platform is not only the deepest gravity-based structure in the world, but the tallest structure ever moved – measuring 472m in height. Once the cells in the base are flooded, the structure weighs over 1 billion tons and it takes the elevator in the leg nearly ten minutes to reach the sea floor. Each of the four legs is subdivided into three independent watertight compartments, and connected by a resonance device that ensures the legs remain ‘in tune’ with one another during particularly turbulent ocean movements.

The collapse of oil prices in 2014 had a significant impact on the fixed platforms market, hitting its nadir in 2015. Although the market picked up over the following few years, spending on fixed platforms in Africa and the Americas has decreased by up to 9 per cent. The meltdown in the oil market in 2018 has now compounded this problem. Spend on platform projects is expected to decrease year-on-year until 2021.

If you enjoyed this guide, why not check out our introduction to the oil and gas industry? Stay tuned to Oil & Gas IQ for the latest content, videos, and guides.