The contemporary shipping industry accounts for three to four per cent of man-made carbon dioxide emissions worldwide and this figure is expected to rise to six per cent by 2020 and then double by 2050.

The IMO makes an emissions deal

Carbon emissions from shipping are already double that of international aviation, and asingle large container ship one can throw out as much acidifying sulphur dioxide in a year as 50 million cars.

As a reaction to projected growth, the world’s 55 biggest seafaring nations signed on to mandatory energy efficiencypromotion and reduction of greenhouse gas emissions in the July 2011 meeting of the International Maritime Organisation (IMO).

Speaking after the conference, Peter Boyd, COO of climate NGO the Carbon War Room, said: "Today's decision should result in fuel savings of $5bn a year by 2020 and CO2 reductions of 22m tons. This is an unprecedented economic and environmental opportunity and the IMO has taken an important step forward".

Although the IMO declaration represents a giant leap in the worldwide consensus towards the reduction of manmade C02, developing nations such as China, Brazil, and South Africa secured a six year moratorium on adopting the measures for new ships, meaning a an effective opt out until the start of 2019.

In spite of this, the move towards using less carbon intensive methods of propulsion is firmly on the cards in world shipping and especially the offshore support vehicles sector.

A large offshore support vessel can output 15,000 tonnes of CO2, as well as 270 tonnes of NOx and 10 tonnes of SOx for low sulphur fuels every year. 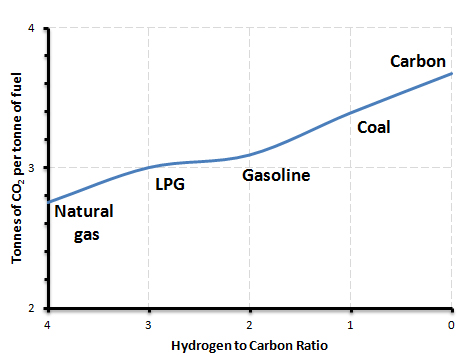 In the comparison chart above we can see that natural gas and LPG clearly release less carbon into the atmosphere than conventional gasoline, and the offshore industry has started to embrace this.

Companies like Finnish corporation Wårtsilå, which manufactures and services power sources and other equipment in the marine and energy markets, have started to roll out hybrid Dual-fuel technology for offshore support vessels, based on conventional diesel and LNG.

The advantages of this dual-fuel capability are huge reductions in NOx gases - up to 85 per cent compared to diesel – a significant drop in C02 output and the complete elimination of sulphur oxide.

Although 100 per cent LNG propulsion would be desirable for support vessels, the hybridised approach represents a big step forward in the plan to shrink the offshore industry’s ecological footprint.

Although the environmental benefits are plain to see, cost is the main inhibitor to the adoption of LNG propelled ships in the modern shipping industry.

Experience shows that while an LNG vessel may have a useful lifespan of 20 to 25 years, debt will usually have to be amortised over a period of 10 to 15 years, making financing sub-optimal.

In addition, there is still resistance and lack of understanding from many quarters as to the benefits of LNG and the LNG market in particular, which reduces the number of financing bodes that make capital available for new ship building.

Whilst prices and markets are still relatively misunderstood, the trail that can be blazed for emissions reduction by LNG support vessels will be pioneering but limited, absent binding emissions stipulations from the global shipping community.