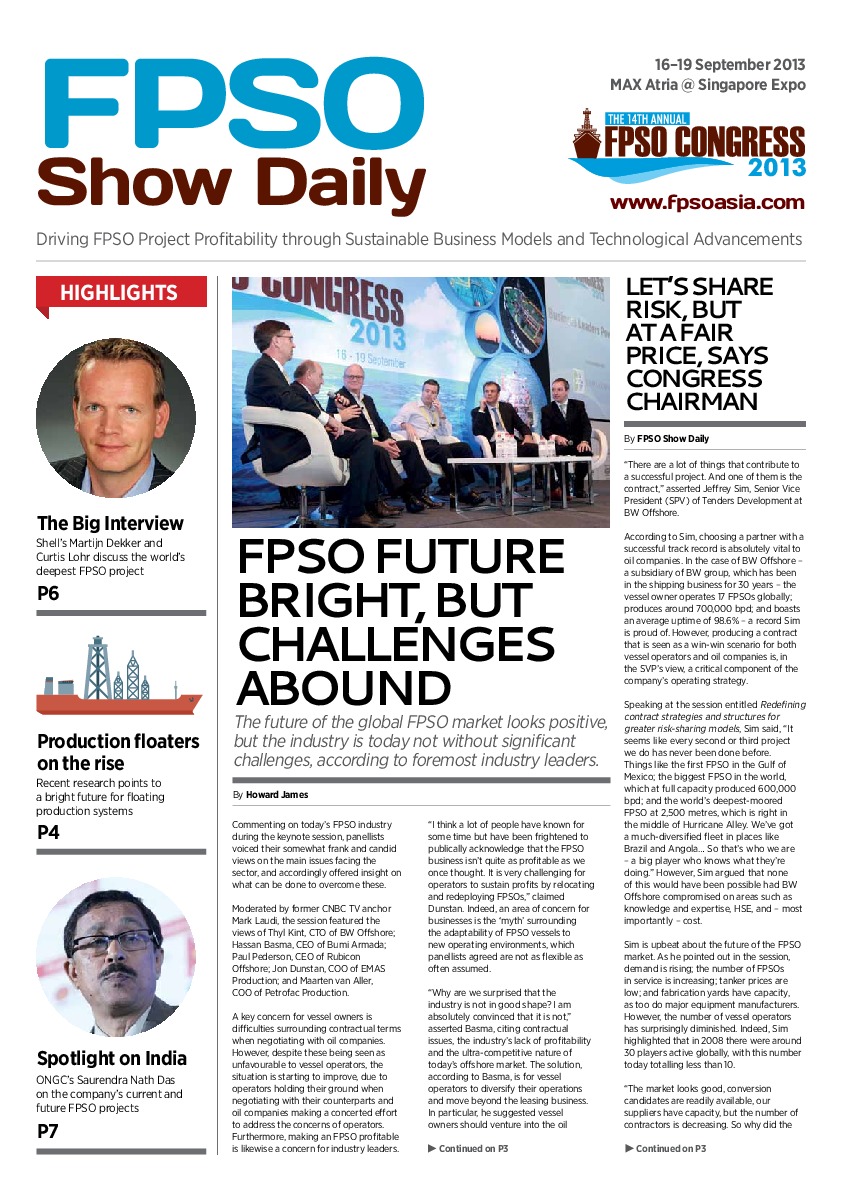 This all encompassing review takes a 360 look at every aspect of the current state of the FPSO sector and features new interviews, strategy and content from the 2013 congress - the largest FPSO event in the world. If you are in FPSO this is an essential read.

By Howard James
The future of the global FPSO market looks positive, but the industry is today not without significant challenges, according to foremost industry leaders.

By Kelvin Sam and Ding Li
FPSO awards in the next 12 months may be slightly lower but the long-term outlook remains healthy.

"The long-term outlook for FPSOs remains healthy and FPSO awards should rebound in 2015 driven by field developments in Brazil, Africa and the Asia Pacific"

"A major challenge for banks is that while most financiers accept the technical risks associated with FPSO vessels, they are not prepared to take a risk on a field that might not perform"

"There are a lot of things that contribute to a successful project. And one of them is the contract" asserted Jeffrey Sim, Senior Vice President (SPV) of Tenders Development at BW Offshore.

PRODUCTION FLOATERS ON THE RISE

Recent research shows there are 72 floating production systems currently on order worldwide, a record high. With oil demand unlikely to diminish over the next two decades, the outlook for the FPSO market seems positive. Why and where should FPSOs be redeployed?

WHY AND WHERE SHOULD FPSOS BE REDEPLOYED?

IN CONVERSATION WITH MAARTEN VAN ALLER

THE BIG INTERVIEW WITH SHELL’S MARTIJN DEKKER AND CURTIS LOHR

"An area we can improve upon is to involve all companies in the development of projects much earlier, from discovery through to production" Martijn Dekker

LEARN MORE: FPSO: Why Costs Go Out Of Control & Projecting The Bottom Line

LEARN MORE: FPSO: Groundbreaking FPSOs, On the Verge of Something BIG