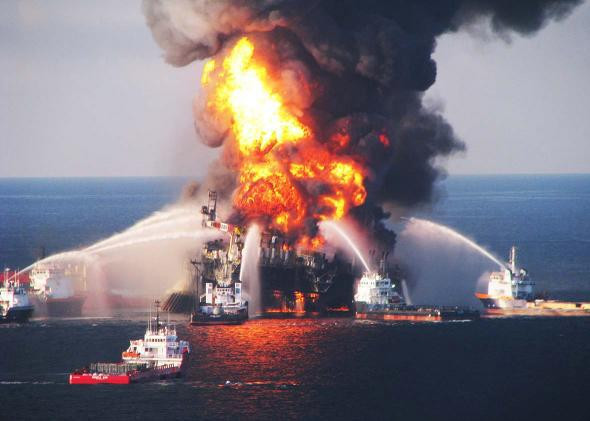 As an orderly queue of potential litigants begins to form outside BP HQ over the failures that caused Deepwater Horizon, it appears that from the early release of the findings of the Presidential Commission, negligence of multiple parties can be attributed to the multiple failures involved.

This negligence has extended beyond the corporate sphere and into previous US Government administrations, their agencies and members of Congress. Putting the Commission Report in context, we need to go back in time to 1982, and take in some history.

Two World Events That Were Never To Be Repeated

The Ocean Ranger was a US semi-submersible rig that sank on 15th February 1982, whilst drilling an exploration well off Newfoundland. All of the 84 crew on board lost their lives in the incident. A Canadian Royal Commission spent two years looking into the disaster, which, like many, proved to be entirely avoidable. The Commission concluded that, amongst other things, the inspection and regulation of the offshore oil industry by the US and Canadian governments were, in their words "ineffective."

Both US and Canadian Governments made significant commitments after the tragedy, including that of improving the regulatory framework for their offshore oil industries.

Six years later, on 6th July 1988, an explosion and fire on the Piper Alpha North Sea platform claimed the lives of 167 persons on board. The Public Inquiry into that event led to revolutionary changes in the way the industry was regulated in the UK, and how the risks to persons offshore were to be assessed and reduced to acceptable levels.

Although the post-Piper Alpha Safety Case culture was adopted widely both in Europe and the wider world, it was virtually ignored in the US. For example, at the time of the Deepwater Horizon accident there was no requirement in the US to develop or submit safety cases to any Government agency.

Despite the disasters that preceded the Macondo incident, it appears that the lessons to be learned were broadly unheeded. According to the findings of the Commission, in the ensuing decades not much changed for the better with regards to the regulation of the offshore oil industry in the US.

The preliminary findings show the oil industry to be out of touch with reality or infused with recklessness. The industry's case for deepwater drilling was predicated almost totally on the argument that blowouts were rare events. In fact, prior to Deepwater Horizon, the Gulf of Mexico has had the biggest share of the world’s blowouts: it could even be regarded as a global blowout hotspot.

Since the Sixties, the Gulf region has suffered 11 notable blowouts – or one every four years - with 31 associated fatalities and massive pollution. The lack of confidence in the MMS by the Administration was obvious, as witnessed by the sacking of the Head of MMS and the demise of that organisation in the wake of this incident. It took Congress only a few days of scrutiny to discover that the emergency oil spill response plans for BP amongst others were lacking in the extreme.

In essence, if Congress and the incumbent administration had exercised proper attention to detail prior to giving agreement to issue leases allowing drilling in deepwater, the Gulf Oil Disaster may never have happened. In addition to this, it seems more than a little hypocritical that the Congressmen and administrators who were so energetically baying for the blood of the BP executives nine months ago, were strangely silent in the interim years that made the Macondo incident possible.

As the US Environmental Protection Agency makes public it intention to sue BP and others over this debacle, one question remains unasked and unanswered: can we derive legitimacy from a legal action for gross negligence against other parties, in an incident where the administration’s own negligence is plain to see?