LNG Bunkering: High Flying In Europe But It’s The East That Will Make it Soar 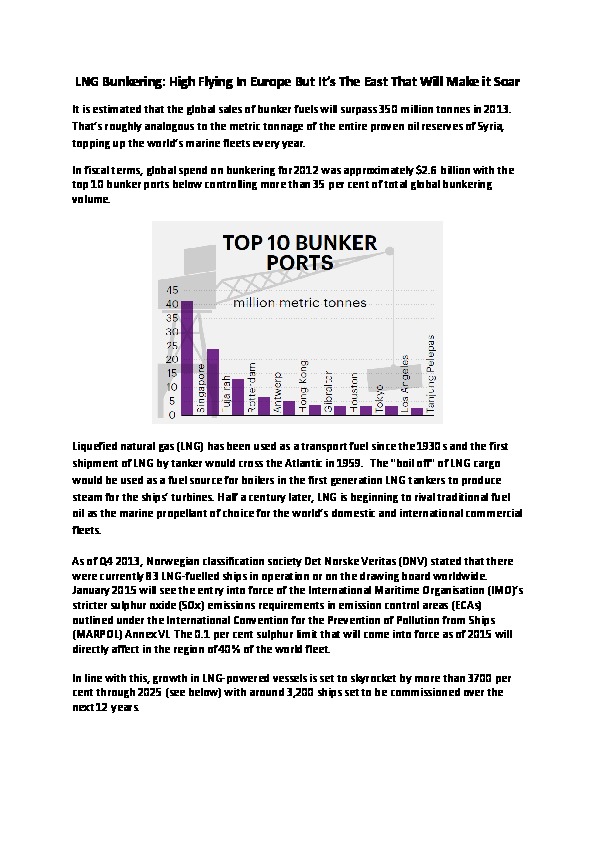 It is estimated that the global sales of bunker fuels will surpass 350 million tonnes in 2013. That’s roughly analogous to the metric tonnage of the entire proven oil reserves of Syria, topping up the world’s marine fleets every year.

In fiscal terms, global spend on bunkering for 2012 was approximately $2.6 billion with the top 10 bunker ports below controlling more than 35 per cent of total global bunkering volume.

Liquefied natural gas (LNG) has been used as a transport fuel since the 1930s and the first shipment of LNG by tanker would cross the Atlantic in 1959. The "boil off" of LNG cargo would be used as a fuel source for boilers in the first generation LNG tankers to produce steam for the ships’ turbines.

Half a century later, LNG is beginning to rival traditional fuel oil as the marine propellant of choice for the world’s domestic and international commercial fleets.

As of Q4 2013, Norwegian classification society Det Norske Veritas (DNV) stated that there were currently 83 LNG-fuelled ships in operation or on the drawing board worldwide. January 2015 will see the entry into force of the International Maritime Organisation (IMO)’s stricter sulphur oxide (SOx) emissions requirements in emission control areas (ECAs) outlined under the International Convention for the Prevention of Pollution from Ships (MARPOL) Annex VI. The 0.1 per cent sulphur limit that will come into force as of 2015 will directly affect in the region of 40% of the world fleet.

For the bigger picture on LNG bunkering click on the button below to download the full report....